skip to main | skip to sidebar

It's a little surprising (even I myself find it so). But I'm kick starting my return to blogspot with a short piece on Kick!

Forgive me for the cheesy title - I just can't help it.

I've decided to do a bilingual entry after scribbling some notes on Kick. I just meant to write some notes in English for the sake of convenience. But it turns out that it will be more precise if I convey my ideas in English (regarding what I want to say about this movie).

As we Hong Kongers are looking to the North nowadays, people in the tinsel town are definitely looking down south! There are so many remakes from Southern hits in progress. There's this piece of news about Asin on Behind Woods and it prompts me to write about Kick!

To me, Kick is quite a special movie. As I”ve confessed to my Taiwanese blog mate Amanda, this is the first Southern movie with an “uncle-looking” hero. (that's how we call heroes with very obvious south indian looks for fun in Chinese) I struggled so much before I watched it. But it is an interesting movie and totally deserves to be one of the biggest hit in the Telugu cinema in 2009.

I’m predicting the failure of the Hindi remake of Kick if Salman Khan is to be the hero. Ravi Teja, the actor in the Telugu version, is not that young himself but I’d say Salman Khan is not suitable at all. He doesn’t possess that randomness (based on the bits and pieces of his performance I’ve seen – yea, I know that doesn’t sound like a "responsible” bollywood fan) that Ravi Teja illustrates in Kick. The protagonist Kalyan is a person going after thrills and risks in life, or “kick” as he calls it. And he’s such a chatterbox! Salman Khan maybe fine in Wanted. It’s a character that requires him to look cool and not having to speak too much (I only guess it from Pokiri) 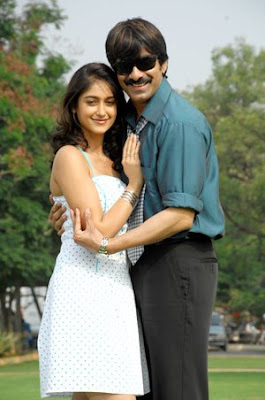 Ileana and Ravi Teja as a pair looked a bit weird to me at the beginning. But they have very good chemistry. I've read a lot of comments about how Ileana can't act. (I also don't find her performance in Pokiri outstanding) But I guess it's mostly about her earlire works. I think she did well in Kick and she's cute enough for me to overlook her less-than-1st class acting.

The film is full of craziness and it made me laugh so much (also probably because I was having my exam at that time so basically anything other than textbooks and notes were funny).

Kick has references to other movies like Arundhati and Ghajini -

The article is helpful and worth reading. Thanks for the tips. Your blog always made a
positive difference in my life
CSUF Guide